Speaking to kids - the right way!

Are children mini-adults?   Should you treat them that way?

I imagine that most parents would say not. But science tells us otherwise.

In 1964, Eric Berne, of the San Francisco Psychoanalytic institute, published a seminal work on the science of 'Transactional Analysis - the games people play'. The text is still being used to introduce these concepts in psychology and management science degree courses today.

It describes three states of mind, or ego states, that people (and children) use when communicating:

e.g. "Explain to me, why are you scared of monsters at night, but not in the day?"


The Transactional Analysis theories explain that human interactions between two people operate between these states, and that starting with a certain state illicits a response in the expected state of the other person. 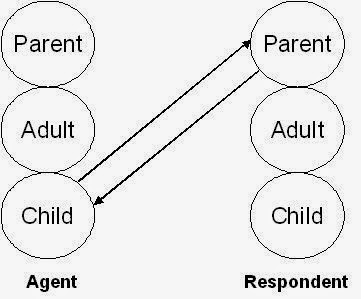 In the above diagram, the child makes a request, "Dad can I have an ice-cream?". The father responds as a parent, to comply with the expected ego state, "No, you can't. It's nearly dinner time!".

A similar request made by a child, but acting in the Adult ego state, could be "Dad, it's really hot - shall we have an ice-cream to cool down?", would illicit an Adult ego state response. "We could do, but it might spoil our dinner."

Adult to Adult interactions typically reduce the potential for emotional responses, by maintaining an equal and analytical discussion. Child to Parent or Parent to Child interactions are typified by a reliance on status superiority to reach a conclusion.

As children tend to default to the Child ego state until they are mature enought to realise that reasoned rational discussions are typically more lucrative, the child will continue to use that state as the default starting point for an interaction. The Child-Parent style interaction is re-inforced frequently in children's entertainment programs, the school-yard and by other parents. It makes for good drama, but poor quality familial relationships.

The good parent should always be aware of this transactional mechanism, and can always respond in the Adult ego state, creating a 'Crossed Transaction'. 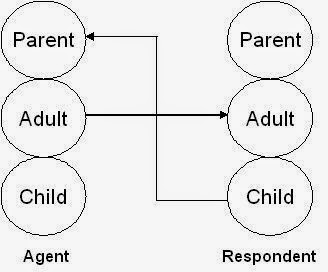 This approach often nullifies the Child ego state, and can illicit a changed ego state in the child, to continue the discussion in the Adult state.  Thereby reducing the likelihood of emotional escalations, annoyance (if unsuccessful), or misplaced pride (if successful).

Adult: "Do you know where my cufflinks are ?"
Child: "You always blame me for everything !"
Adult: "That's because you're the one who plays with my stuff and doesn't put it back!"
Child: "No, I don't! I haven't seen your stupid cufflinks!"

Adult: "Do you know where my cufflinks are ?"
Child: "You always blame me for everything !"
Adult: "I'm not accusing you, I'm asking if you have seen them lying around anywhere."
Child: "No, I haven't. Have you looked by the washing machine?"

So, to answer the question of "Should we talk to kids as if they are adults?", then I'm very much for that approach - and science backs up this approach.  But BEWARE... kids are still kids, and they need much more encouragement, positive feedback, and a greater sense of belonging than us, more hardened, adults. So be sure to communicate Adult to Adult, but throw in as much positivity and empathy as you can.

And... give them more hugs than you need - because even when they converse in Adult state, they still need to know you love them.
Posted by Andy Weston at 09:40